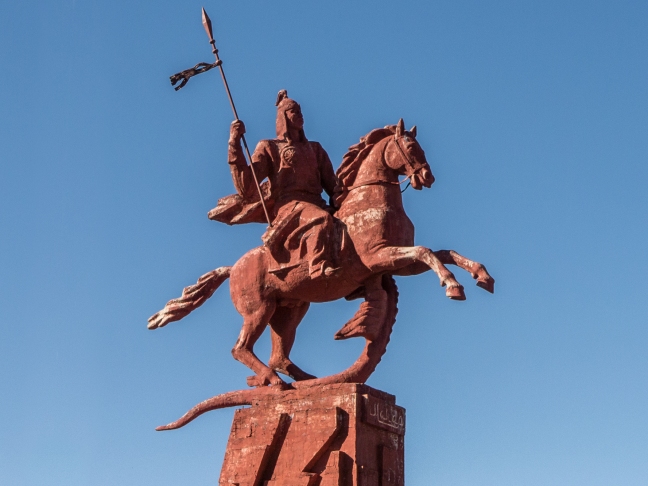 I spent almost a week in Osh, to the clear confusion of my hotel owners. Where does he go all day? Why doesn’t he eat our breakfast or have tea with us? The answer to the first was that I was usually wandering the aisles of Osh’s grocery stores reveling in the availability of things like cold drinks and yogurt. The answer to the second was that the breakfast was much better at my mom’s swankier hotel. I was also, as would turn out to be more common than I would have liked along this stretch, sick. It wasn’t the beans. It might have been the Nutella. But the third and final culprit, discovered two days out of Osh, was the peanut butter I’d bought in Dushanbe. I would end up throwing away any food (not very much left, mind you) I’d bought before Osh.

I had a few options for crossing Kyrgyzstan. One was to continue on the main route through Jalal Abad (the safe one, not the one in Afghanistan) and Karakol to Bishkek. All routes through Kyrgyzstan are scenic, but this one would have more traffic and a better road. Another option would take me on a rough road through rural Kyrgyzstan, through Naryn, south of Issyk Kul Lake and skip both Bishkek and maybe even Almaty. This was an established bikepacking route that I was interested in exploring. If you do it right, some stretches are basically roadless, with a lot of hike-a-bike.

After almost a week in Osh, I still didn’t feel up for the southern route. The heavy bike is a chore to haul anywhere, so a hundred miles of mixed riding and hike-a-bike right out of the Pamirs was out of the question. The idea of riding in civilization for a bit, with well-outfitted (for Kyrgyzstan) towns and the promise of a liter of milk every night in my tent sounded better. Simple pleasures. So I went with the main road. With Bishkek about 650km away, I anticipated a sort of more relaxed pace and easier riding. After all, it wasn’t at 14,000 feet. I would leave the bikepacking route south of Issyk Kul for next time. (If you want to do it, contact me.)

If it’s not already apparent, I had been suffering from a bout of why-am-I-doing-this-itis for the majority of my time in Osh and the first day or two thereafter. Distance wise I was only halfway to Ulanbataar, and the miles just seemed to stretch out endlessly. After the deserts in Uzbekistan and mountains in Tajikistan in tandem, I was just sort of worn down. I was abandoning routes that I wanted to do but just couldn’t get excited for anymore. Trying to ignore (see the tone of the previous paragraph) that the rest of Kyrgyzstan would most likely be far from the low-intensity riding that I needed to recharge. If you’ve read this blog before, you’ll know that it’s become somewhat of a tradition for me, when it’s available, to make a stop at a KFC after some tough riding. In the end, I sort of huffed and accepted that the final stake in the decision to go to Bishkek and Almaty was going to be that both had a location.

The southern route did turn out to be a little easier going, but still pretty tough riding. The road is in great condition, albeit with a bit of traffic, but people were generally polite to me and gave me space.  The only problem was that when I mapped out the elevation profile, the small scale and largest pass (3200m) masked the sort of intense up-and-down climbing that would take place over the first 300km or so. On one particular stretch (right after Taskomur), I accumulated 900-1000m of up-down-up-down climbing over just 40km. So my distance was limited quite a bit. Throw in the fact that I got sick again one night, and I didn’t quite hit the distances I wanted to hit on the first half of the ride.

The border with Uzbekistan also sort of messes with the road’s route. Borders here are so… oddly both well- and ill-defined. Communities don’t really seem to be much different on either side of the border, but borders are borders. Roads have been altered so as to avoid the bureaucratic nightmare of double crossings, which makes the routing sort of screwy. A 5km stretch between Osh and Jalal Abad turns into a ~30km detour. Google doesn’t really know what to do, and with the time change between Uzbekistan and Kyrgyzstan, my phone didn’t really know where I was either. Sometimes the road goes five feet from the border fence.

There are two large ‘Firenz Gipermarket’ supermarkets (a large Kyrgyz chain) in Osh and Jalal Abad, which I note only because they were large enough to have peanut butter. If you’re heading this way towards the Pamirs, these are good places to stock up on protein. In this post, it suddenly strikes me that I’ve used two strange threshholds, KFC and peanut butter, as some indicator of development or international influence. Introducing Bryan’s human development index: 1) Electricity 2) Wi-fi 3) Peanut Butter 4) KFC. It’s possible I’m missing a few steps.

I lucked out with weather. During the last two days into Osh and during my time there, it had been very rainy. The next week, the region turned decidedly more sunny and almost hot during the days. Some days were downright pleasant, in spite of the tough riding. I switched to a t-shirt for most of the riding, upping my already very strong tan line game. I’m still not ready to switch to shorts, but I feel summer coming and I will be soon. During the first three nights out of Osh, I had some pretty intense thunderstorms and driving rain in my tent. I even got a small melted hole in my tent, which might have been from either a lightning strike or an ember from a nearby strike.

The second half of the ride to Bishkek, I finally got over my road weariness and hit my rhythm again. The weather, in combination with some truly spectacular valleys, plateaus, and passes made the final few days into Bishkek kind of magical. The high mountain streams were clean and drinkable without a filter, and the rural towns I would pass through really hit that sweet spot of friendliness without being in my face. Waves from windows and polite honks, not drunken screaming and demands for attention. Traffic was light, and it shared the road with flocks of sheep and herds of horses. There were a few tunnels in the first half of the ride (very short, and walkable). The one that wasn’t short I happened to arrive at just as a herd of sheep was being driven through. I think I was the only one happy to have the sheep there, as I just slowly rode behind them as they blocked my way and kept the traffic slow.

After Taskomur, the road goes into a gorge, and gets really pretty. There are some dams and reservoirs here that have created beautiful turquoise lakes at the base of huge mountains. After a long stretch of sinusoidal garbage (or, another one of my descriptors for it, ‘uppy-downy-bullshit’), there’s a pass at 1450m to get to Karakol, and then some riding around Toktogul Reservoir to get to the town of Toktogul. Then after that the road goes up. And up. 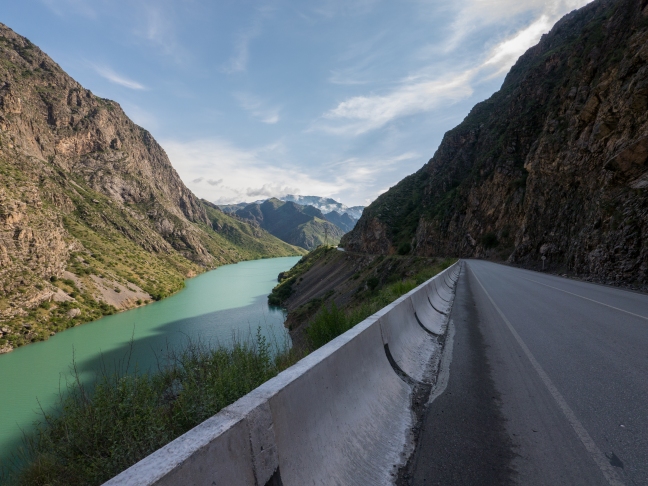 There aren’t many towns (well, really, there aren’t any) along the second half of the ride, between Toktogul to Sosnovka. That’s a big stretch, that climbs two 3200m passes. The first pass was probably one of the longest sustained efforts I’ve ever put in on the loaded bike. 2500m of accumulated climbing out over about 68-70km, which I split into the end of a short day (300m) and a long, long day (2200m). The big day was preceded by my first true hammock campsite of the trip, in the depths of a huge valley. After three months and change, I finally found two trees, spaced evenly apart, with trunks exposed.

I don’t have much more to say about the big passes. They were big, and they took a long time to get through. The second one had less elevation gain, but it was steeper. About 1000m of climbing over 12-13km. At the top of that pass, there’s a large 3-4km tunnel that isn’t rideable, so I accepted my third hitch of the trip. I sat in the cab of a truck while my bike rested in the back on top of a layer of sheep dung about six inches thick. I won’t go into how I got scammed out of some money for the ride, because it’s kind of embarrassing. Long story short, pick your driver with more caution than I did, and don’t just accept the ride from the first person who approaches you.

I’ve been seeing about one cyclist a day now, all heading the direction I just came from. Each one says ‘you’re the first cyclist I’ve seen!’ and I tell them ‘well, there’s a guy a day ahead of you, a couple two days ahead of you, a swiss dude about three days ahead of you…’ Everyone’s going to the Pamirs to have a good time with each other for company, and all I have to look back on is a few weeks of trying solitude.

This section just turned into a grind, but I’m coming out of it feeling rejuvenated. Lots of climbing, especially coming straight from the Pamirs, but it was really pretty pleasant riding. For the first few days I sort of just had to grit my teeth and push through. But I eventually settled into a rhythm again, a rhythm that had just evaporated upon my arrival in Osh. Kyrgyzstan is a place I could really see myself coming back to. There’s so much more to explore, but next time I’ll take a lighter bike.

From here the only really thing I know about my route is that I’m not entering China yet. The security situation has gotten so intense in Southern Xinjiang over the last year that people speak of 20+ passport checkpoints a day, borders that take a day to cross and lengthy interviews. The region is just now starting to receive true news coverage, so you can look up the whole dealio elsewhere. I’m certainly not in any position to go on and on about the situation in this public space. I’m just not interested in getting hassled as much as traveling in Southern Xinjiang would require. So I’m going North to Kazakhstan again, and the steppe. And the steppe is going to be hot, flat, and sparsely populated.

2 thoughts on “Osh to Bishkek, Kyrgyzstan”

AZ Trip Report -> bryanmkevan.bike
I've been Bikepacking and not writing much. The answer is:
Was it a dream? Do I even build bikes anymore? 🌪
Struggled with whether or not to share this photo, they will take while to come together. These exceed my wildest hopes and dreams for this project, thanks @element22titanium . But at this point I just look at them and feel exhausted, not excited. So I'm not building until I'm excited again. That's all I wanted to say today.
BMK Frameworks Team Ride Numero Uno
2.5 months is my fastest turnaround yet. Really happy with how this one turned out! Here's the future of BMK Frameworks!