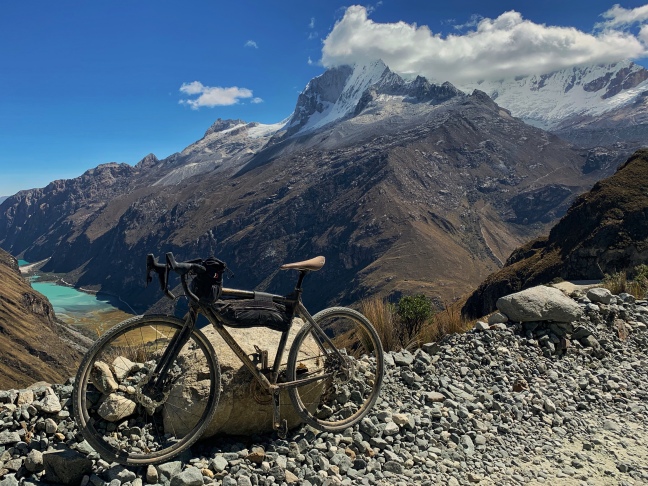 At about this time last year I was in the process of finishing up riding the Silk Road. It took me five months, and I rode the bike, and myself, into the ground. I didn’t know Russian, and didn’t ride with another person for a single day. I spent long, long hours rolling hash from literal ditch weed in order to stave off the intense loneliness of Eastern Kazakhstan. I was poked and prodded by every authoritarian government from Tbilisi to Mongolia. Then I moved to West LA, started graduate school, and joined a collegiate cycling team. It was a definite change of pace (cadence?).

This June, after my best attempt at a focused year of grad school, I hit the road again. This trip really came together in an evening. A late-identified gap between school and summer research at UCLA. Cheap tickets. A desire to find out what kind of new crazy roads I now have access to after a year of training in the Santa Monica mountains. Bolivia in August became Peru… sooner.

So two weeks later I flew into Lima at 1AM, with not much of a plan except for a town in the Andes to head for and a return plane flight. I scouted out roads and looked up elevation profiles while on the flight there. I had no goals besides to ride big on a homemade frame and to avoid single-use plastic. A long-running frustration with developing countries is how much plastic ends up by the side of the roads. Reducing my reliance on single use plastic meant using electrolyte powder, a filter, and local markets rather than bottles of juice and overpackaged supermarket fare.

I got the bike checked on United from LA to Eugene and then through to Lima for just $60 total, a personal record for talking my way out of oversize bag fees. Those avoided fees paid for more than half of my expenses in country. I was also happy to see the bike arrive undamaged and still wrapped in bubble wrap, as I’m not sure how I’d react in the early morning outside the Lima Airport after four flights to find my precious homemade frame smashed. Alas, it was no worry. The seat was a little wonky and required some gluing, but this definitely was no trip-ender.

I set the bike up outside the airport, waving away the final taxis of the night, and was on the road by 3AM. I made my way to a collection of airport hostels, hoping that someone would be awake and willing to store my bike bag for three weeks. Again, fortune would smile on me, as I found one quickly that asked only 30 soles (~$10) to store the package. They even let me take a quick nap for free and use the wi-fi before riding off into the misty dawn of Lima.

The three days to Huaraz were tough. I had 400km to cover carrying three weeks of gear. The first day was spent sucking fumes on the wide shoulder of the Panamerican Highway and the second and third a lengthy two-day climb from sea level to a high valley in the Andes. It’s amazing to me that some people ride the Panamerican through South America. It is the definition of monotony. Huge rolling hills through uninspiring scenery and developing world truck stops. That’s why I went inland and headed for the mountains! On Route 16, the road climbs for 120km from sea level to 4,100m (for reference in this post, 4,000m is about 13,000ft). I camped out at 2800m after the second day to acclimatize, and finished the push to Huaraz the next day.

I stayed in Huaraz for a few days at the Monkeywasi Climber’s Hostel. Huaraz serves as a base for large treks and climbs in and around the surrounding Cordillera, and Monkeywasi is one of the more down to earth hostels in town. It is highly recommended as a low-key adventure base.

I did a few large day rides around Huaraz. The town sits at about 3,000m, but the roads on either side of the valley wiggle their way up to more than 4,500m.

I grew tired of the busy Huaraz and riding away from its hostile and surprisingly racist dogs, so I moved down the road to Yungay. As with most racists, the dogs were pretty much all bark and mostly no bite.

Yungay was destroyed by a large earthquake and ensuing landslide in 1970. A town of a several thousand, literally wiped off the map by a large portion of Huascaran silding down the valley at 200mph. The former site of the town is adjacent to the new town, and serves as a monument to the destruction. I enjoyed Yungay immensely. The perfect size of town for me, large enough to have a sizeable local market and street food, but not quite large enough to be dominated by a large supermarket chain.

Yungay was small enough to make me feel like an outsider, as most treks and other adventures start from the much larger Huaraz. I like that feeling. It’s odd to think of Huaraz as more outside of my comfort zone than Yungay, but I spend so much more time on my bike in towns like Yungay than Huaraz and I have really come to enjoy the smaller setting.

So I rode big from Yungay for a few more days. Up the east side of the valley, up to the west. Days full of unbelievably welcoming interactions with rural Peruvians. Large gravel rides, high passes. Cap it all off each day with double portions of local Peruvian fried chicken and electrolytes. It was just a great time all around.

There’s not much to add beyond this point. I could just talk at length about each day ride, but the pictures sort of speak for themselves. I just have more pictures than I care to post on Instagram, so I’ll dump them here. I eventually moved to Carhuaz just up the road from Yungay and below the Punta Olimpica where a gloriously paved road snakes up a valley straight from 2700m to the highest tunnel in the world at 4800m. I made two back-to-back visits to cap off the trip.

It was a lot of riding in a truly stunning setting. The Cordillera became my playground for a few weeks. The weather was unbelievably nice, the company was great, and Peru is just so welcoming and accessible. The bike is a dream to ride, I’m so proud of how it has held up in the first six months of its life. In over 5,000 miles, the Pamir has taken everything I’ve thrown at it and just keeps chugging along. I did this whole trip on the same 48t one-by chainring that has become my standard setup. I have no ability to go slow, but my legs have become cannons over these six months.

From Carhuaz, I rode back to Yungay and Monkeywasi for one final night with the ice climbing crew. After that, I rode up to the first pass again to get one final sunset and sky of stars at 4100m before heading back to sea level and home.

I wish I had more to say about this trip. There was a lot of good, not much bad, and the bad is what makes for entertaining blog posts. On the other hand, maybe the bad things don’t seem so bad anymore and I’ve moved beyond the need to play up every daily struggle for dramatic effect. There were some brutally tough days, and I’m quite tired. I fell far short of Mongolia-level exhaustion and breakdown, but in all honesty I’m not sure I want to go to that place mentally or physically ever again.

So I’m left with this summary: Things went according to plan, and the last year of training allowed me to push myself much harder and ride much bigger than I anticipated. I admit to having soured a bit on travel in the developing world after the Silk Road. But here in rural Peru, the hostility of daily life in Central Asia was replaced by warmth and welcoming arms. It was a few weeks full of wonderful food and idyllic scenery and culture.

I love how haphazard and fluid this trip felt. I like the type of all-around strength that these kinds of trips build. The feeling of waking up after the first time up Punta Olimpica in a dirty hostel gasping for air and wanting only to start it all over again was intoxicating.

One day I’ll have obligations and bike trips will need to have more structure to them. Maybe a family to corral, a dog to make sure gets cared for, professional concerns, etc. Put a Burley trailer behind a recumbent and ride with an orange flag. I’ll grow beyond the solitary, masochistic series of me-versus-nature trials and do something more comfortable, like a tour of wine country. But while I’m here, this fluidity and dirtbag ethos really works for me, and it made this trip into a very zen experience. No doubt about it, I loved Peru, and can highly recommend this ride and the towns I visited.