Welcome to my blog! I encourage you to check out my about page to see what I’m doing, where I’m going, and where in the world I am right now. Over the next few years, I’m going to be splitting my time between a few different countries, doing things in places with people. That’s about how far my plans go at the moment. I’m going to use this to mostly chronicle my bike touring adventures, but there may be a few more adventures thrown in there as well. My most immediate plans include a one-way ticket to Chilean Patagonia in two weeks with my touring bike to do the entire length of the Carretera Austral and more. After that, I’ll need to end up in China early next year to meet up with some people from school for work! Enjoy!

This week I took three days and rode the Old West Scenic Bikeway (http://rideoregonride.com/road-routes/old-west-scenic-bikeway/), a state-established 175-mile touring route in Eastern Oregon. It was a great ride through an incredibly remote yet remarkably beautiful part of Oregon. The bigger settlements, like Long Creek or Dayville, only had a population of 150-200 people, with most living on cattle ranches outside town. The people were kind, and gladly shared with me any information they knew about my route or lodging. One very scruffy man with half a mouth of teeth at the general store in Long Creek offered me a place to pitch my tent even though his house didn’t even have running water. I stopped in Long Creek at about 53 miles, Bates state park at 110 miles, and finished at 175. Weather was around 90 degrees each day in the brutal sun and almost no shade. Lots of sunscreen and water!

This was my setup for the trip. The Surly Long Haul Trucker is a go-to bike for touring, and it has served me well this summer. I met two other cyclists on this trip, and both rode them as well. Here’s a summary of the gear that you can see:

This is the area around the John Day fossil beds. There are some rocks and layers that were a lot of different colors. I’m not a geologist, and the two times I went through this part I was going quickly so I don’t have many pictures.

This was at the top of the 2500ft climb at the end of the first day, and was my first experience with the aforementioned delirium. After about 30 miles of flat, the road suddenly jumps up and elevates 2500 feet over the space of 10 miles. My first climb on my loaded bike, I took this climb in the blistering heat of afternoon and I had to stop many times to cool off. After this, it was about 10 miles to Long Creek, where I hitched my noble steed outside the general store and found a place to sleep for the night. As I fell asleep, I listened to the daughter of the hotel owner argue with her mom about how her new boyfriend worked hard, paid the bills, and wasn’t an alcoholic. In my warped state, I had no trouble placing myself in an Old West you’re-not-from-’round-these-parts cowboy epic. 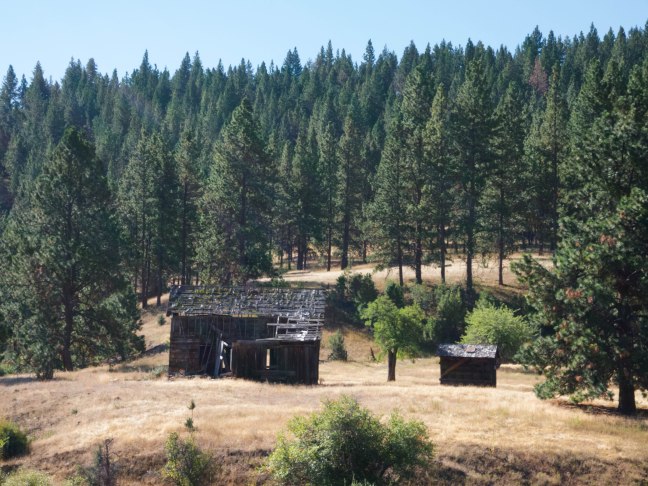 The second day was the best day by far. After a quick descent in the morning, the day’s ride was along a fork of the John Day river in the Malheur National Forest. Cattle guards outnumbered cars on this open range by about 2:1.  There’s a weird part of riding for 5-6 hours where talking to cows seems pretty reasonable. I asked these ones to say “Cheese”, and they were happy to oblige. There were a few ghost/borderline ghost towns along this stretch, like the town of Galena. Many of the ranches still had their original homesteads on them in various states of disrepair, sometimes right next to a newer house. I stopped at the campground at Bates State Park, where only the man-made lake of an old company logging town existed. 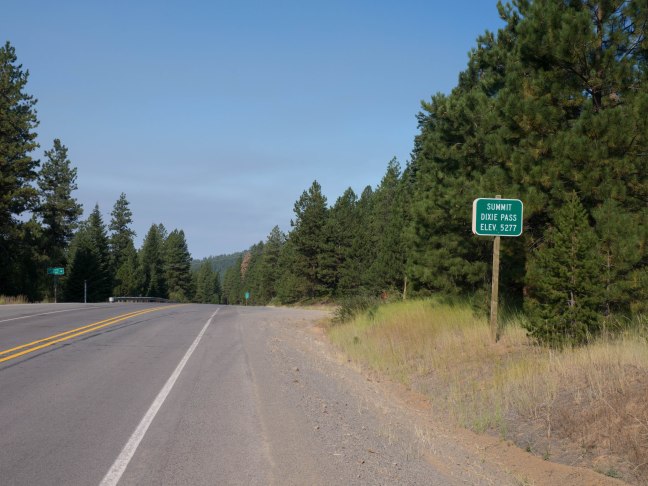 I don’t have many pictures of the third day. It started with one final climb to 5300 feet, then a slight downhill the rest of the way to my car. Route 26 was crowded and the winds had changed directions, blowing smoke from the South Fork complex over the route. This was a random wagon overlooking the John Day valley, and you can see the smoke over the mountains. I had to race in order to reach my car before the lot closed at 4pm, and I just made it in time.

My pictures don’t do this route justice. It was gorgeous, and the traffic on most of the route was minimal to nonexistent. The people I met were very helpful in spite of their Impeach Obama signs and occasional close passes on the wide shoulder. I would suggest doing the ride during the cooler months, because three days in that heat made it very tough.

That’s my last tune-up before I leave. Off to Chile on September 16!

Struggled with whether or not to share this photo, they will take while to come together. These exceed my wildest hopes and dreams for this project, thanks @element22titanium . But at this point I just look at them and feel exhausted, not excited. So I'm not building until I'm excited again. That's all I wanted to say today.
BMK Frameworks Team Ride Numero Uno
2.5 months is my fastest turnaround yet. Really happy with how this one turned out! Here's the future of BMK Frameworks!
Sunset makes the fibers glow.
There's that stiffness.
I have built, and a good build it is. Thank you, @element22titanium for the goods. Thanks everyone else for following along on this wild ride. If you told me in 2018 that I'd be building this by 2022, I wouldn't have believed it possible. It's not like a camel appeared out of the haze in Mongolia and commanded me to "Go Home and Make Bikes" but alas here we are.