Before I begin, I want to give a shout out to the two places in Eugene that I have gear from down here. The first is my Ninkasi Brewery hat, which I show off over beers with people I meet. The second is Paul’s Bicycle Way of Life, who built up this tank of a Surly LHT that I’m riding. Everything has performed perfectly. The rims are still intact, and I haven’t had one flat in the 450km that I’ve ridden. The only spokes that have broken are the extras, which were attached to the chainstay. It has welcomed the nasty bits of the Carretera, spat them back out and said “give me more.” She’s a little dirty, and needs to be lubed up pretty regularly, but she’s thriving. Thanks, Paul’s!

Now on to the good stuff. I haven’t updated in a few days, mostly because the hostels down here with wifi are, for the most part, closed during this season. The ones that I have stayed in have mostly been hosting road workers during the night, most of whom I have passed at some point during the day. Nevertheless, they’re an expensive luxury and I usually prefer to camp and make my own food over staying in one and forcing the owner to make dinner for the one crazy gringo that is coming through in spring.

I haven’t seen a single other cyclist yet. The people who pass me on the roads in heavy cars or 4×4 trucks are a mix of road work crew bosses, dump trucks, and the occasional tourist with kayaks loaded on their roof. Kayakers are the most enthusiastic to see me, often giving an excited few honks. Dump trucks usually toot once or twice. Crew bosses couldn’t give a damn. When I pass, I hold up road work.

When I last wrote, I was staring at a 625m pass at Lago Yelcho, hoping for better weather. Well, the next day didn’t turn out to be the clear weather I was hoping for, but at least it didn’t rain. In celebration of this fact, I made it over the pass (and snow) and rode 95km to La Junta in a day. And thus began the ripio from hell. About halfway through, the roadwork started, and the road altered between paved, and OH MY GOD WHAT IS THIS ripio with 1-2 inch diameter loose gravel all chewed up by trucks. By the end of the day, I felt as though a knife had slowly been inserted in my abdomen since 60km and just left there until I was done. I crashed in a hostel in La Junta, as a dozen road workers watched soccer and talked about the crazy gringo trying to fall asleep in the next room.

But all was well, because the next day started like this.

And then finally this.

After days of trying to capture every piece of blue sky I could in a photograph, Sunday was perfect. Clear blue skies, as far as the eye could see. I again celebrated the fact by riding 70km and crashing at a national park with a hanging glacier. The first part of the day brought road work and more poor ripio. Mostly pick your poison: terrible bouncy road work ripio, or huge potholes on roads waiting to be improved. The rest of the day was spent riding along a fjord past Puyuhuapi, which is a really touristy town with fishing and boating excursions during the peak season. Expensive campsite at the glacier, but worth it for the view.

I took Monday off. I looked outside in the morning sore from the last two days, saw that it was raining, got my book out, and didn’t leave the tent but once to go see the glacier.

So here we are on Tuesday I guess. It was partly cloudy this morning turning to sun, and I’ve covered 70km. Tough climbing, with the Queulat Pass at 500m and another climb right after a sharp descent past more chewed up, muddy ripio and road work (they were inserting dynamite and jackhammering cliffs to widen the road). As they saw me descending, I was cheered on by the road workers, who knew that I had just come off of the pass. Fortunately, after the pass the road is paved almost until Coyhaique (2-3 days from here), and I’m savoring the smoothness of the ride. Best views yet in Queulat National Park. It’s getting a little lonely out here. A few people have slowed their cars for a few seconds to take a picture of me, and I give a thumbs up as they drive past. I met a nice group of Chilean geographers in a convoy of white trucks, who are doing extensive mapping of this area. It needs it, as the only guides I have drastically differ in the measuring of distances. 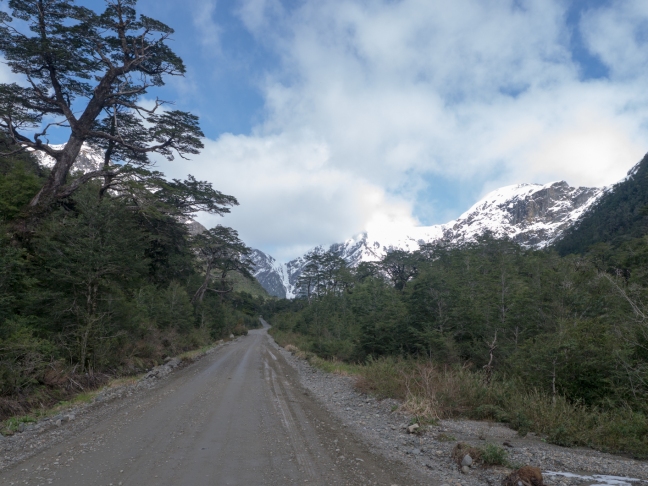 The scenery has changed, as I’m now clearly into the rain shadow of the mountains. Coyhaique is much dryer than the rest of the places I’ve been, and it’s about 140km away at this point. I’m looking forward to it. Basically, the days start with a lot of melancholy “just gotta get through this” attitude, and that gets better or worse based on the weather.

Struggled with whether or not to share this photo, they will take while to come together. These exceed my wildest hopes and dreams for this project, thanks @element22titanium . But at this point I just look at them and feel exhausted, not excited. So I'm not building until I'm excited again. That's all I wanted to say today.
BMK Frameworks Team Ride Numero Uno
2.5 months is my fastest turnaround yet. Really happy with how this one turned out! Here's the future of BMK Frameworks!
Sunset makes the fibers glow.
There's that stiffness.
I have built, and a good build it is. Thank you, @element22titanium for the goods. Thanks everyone else for following along on this wild ride. If you told me in 2018 that I'd be building this by 2022, I wouldn't have believed it possible. It's not like a camel appeared out of the haze in Mongolia and commanded me to "Go Home and Make Bikes" but alas here we are.