The weather’s great in Coyhaique and I’m going to give myself an early birthday present and enjoy the city, and its few cervecerias, for a few days. I’m not really about wine/beer/food tours, but if there were a stop that I could do it at, it’s Coyhaique. So, I’m at about about 600km, pretty much halfway to the pass into Argentina depending on which one I choose, and this seems as good a point as any to take a small break, watch some football, and bid farewell to my 22nd year. I really pushed through the last few days, going about 200km in 3 days. I did 70km which I’ve already written about on the first day, 105km and an unanticipated 750m climb on a “shortcut” yesterday, and limped the final 35km into Coyhaique this morning.

Down here it is much drier than further north. I’m in the rain shadow of the Andes, and spend most of my time closer to Argentina than to the coast of Chile. Gone are the rainforests, and over here spring has definitely sprung. Nothing but fantastic riding weather, with frigid mornings and moderate sunny afternoons. (I heard they had snow a few days ago, but I refuse to believe that) Yesterday was supposed to be a nice mostly downhill ride from Villa Amengual to Villa Manihuales. However, once I hit Villa Manihuales at about lunchtime, about 60km in, I was still enjoying the pavement and pushed on. I’m glad I did now, but man was it tough.

From Villa Manihuales, there are two routes that you can take. One is paved, flat, and follows a valley to Puerto Aysen at the coast before going to Coyhaique. The second is ripio, 10km shorter, but rises to 750km before descending sharply into Coyhaique. It’s sort of unclear as to which path is the “official” Ruta 7. Google maps has the second labeled as Ruta 7, but my guide and the prevailing traffic says it’s the second. I think the signs said the second is Ruta 7 as well.

I took the shorter but less taken one, which climbed sharply over huge expanses of grazing land and barren landscapes. About 33km past the intersection is the small town of Villa Ortega, but beyond that there is absolutely nothing but an incredibly lonely road at the top of a plateau. 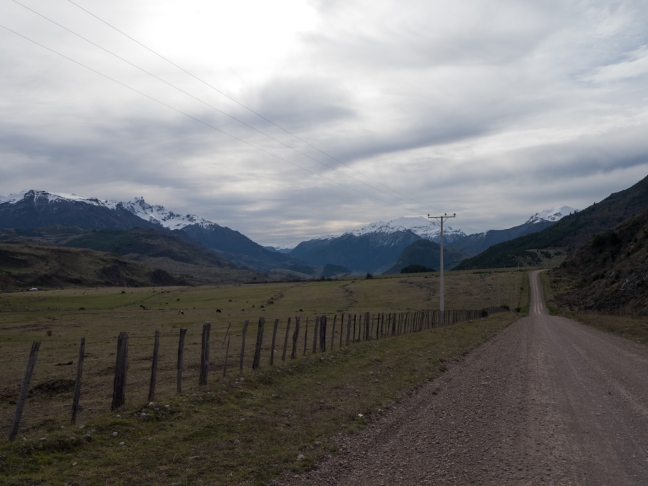 I camped out in the back of a market in Villa Ortega before continuing into Coyhaique this morning on some nasty chewed up ripio.

I finished John Steinbeck’s East of Eden last night. What a read. Maybe outside of this landscape it would be a little heavy handed, but I ended up getting into the meat of the book just as I was riding through this incredible farmland, passing tiny homesteads on massive ranches full of cattle. The towns of Villa Ortega and Villa Amengual, originally established for support of the colonist ranchers of Patagonia, could have been drawn straight from the book.

A few days of Coyhaique where I will splurge a bit and catch a Duck game tonight, and then onward. While I’m here, I need to find out whether my possible entrance to Argentina is even going to be possible in this season. I’m afraid that either the border crossings at Rio Mayer won’t be staffed, that the rivers will be too high, or the one sheep bridge needed to make the crossing will be washed out. If one of those things happens, I’ll have to cross at the common car crossing at Chile Chico. For people who come across this in the future, I’ve illustrated the three best options you have of crossing into Argentina to Ruta 40 from the Carretera.

Path 1 (red): Either take the ferry across Lago Buenas Aires/Lago General Carrera (Argentina and Chile don’t like each other, so each has a separate name for this lake) or go around on the Carretera and cross at the border like the rest of the cars who are on the trip.

Path 2 (blue): Go to Villa O’Higgins and take the Rio Mayer pass into Argentina. This apparently requires some navigational skill because the Chile exit post is at the end of the road on the Chilean side, and the Argentinian entrance post is about 7-8km into Argentina on single person-wide tracks that don’t always lead the right direction. The goal is to find the (possibly just for sheep, may have been washed out in 2009 and maybe rebuilt since) 100m bridge over Rio Carrera, which is the only river that is large enough in that distance not passable on foot.  Another challenge is convincing the Chilean guards that you’re a smart enough gringo to find the crossing without getting lost.

Path 3 (green): Typical bike crossing, involving a ferry that doesn’t run (even then it’s irregular) until November or December, and a trek with your bike after the Candellario Mancilla landing.

I’m hoping for Path 2, but Path 1 might be my only option.